You're probably wondering where Rift Watcher 3 is.

When I wrote the original story, it came out at 140,000 words, which is too long. (You can disagree with me, but it really is unless you're writing epic fantasy (I have, and it's 1,000,000 words long but that's a topic for another day.)) So I split Rift Watcher into three books: 40,000 going to Rift Watcher, 80,000 to Into the Rift and 40,000 went into the currently unnamed Rift Watcher 3 (which was going to be called Rift Watcher: The Last Edenite except some really big named franchise used a similar name recently and I'm not sure I want to follow in their footsteps.)

Anyhow, 40,000 words were added to book one, 80,000 words were edited into book two, and 40,000 needed to be added to book three. Turns out, it's harder than I ever thought it would be to re-end a book that's already been written. Small tweaks are made to the plot and big changes result. It felt like wading through molasses for some reason, possibly because other book ideas are pestering me. (Write me!) I did finally finish, coming in at 95,000 words (which is too long), and am currently sitting on it for an appropriate length of time before reading through it and cutting at least 5,000 words.

Unless I write a Christmas book someday, I won't publish again in December. I have my reasons, the main one having to do with momentum. December is the end, the closing chapter of a year, sometimes one that you never want to revisit, even in memory.

Publishing a book shouldn't feel like the end, but a beginning.

Google URL Shortener to the Rescue


Cause and effect is something I learned in college, along with action/reaction, supply/demand--you know, all of those important business and science things that we deal with every day but don't usually take time to acknowledge. Confession: I'm am left-brained. You'll probably notice it, reading my books. Anyway, I think I'm addicted to Google URL Shortener Analytics. I just clicked on it one day with a "hmm, what's this?" attitude and fell in love with the fact that it can tell me how many people have clicked on my shortened URL link and what country they are from. Apparently Rift Watcher is more popular in Germany, than in the US. Who knew? Well, now I do. 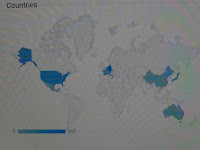 And speaking of cause and effect, Analytics remind me that my small efforts to promote my book create small results. If I start to think no one is interested in my book, all I have to do is tweet that shortened URL and a couple of people click on it and suddenly I'm happy again. (Maybe I'm just weird, but doesn't everyone love a little positive feedback?) When someone from a new country clicks on my Shortened URL, filling a new part of my Analytic's world map, I am even happier.

Most important of all, it has kept me--a writer riddled with self doubt--tweeting.